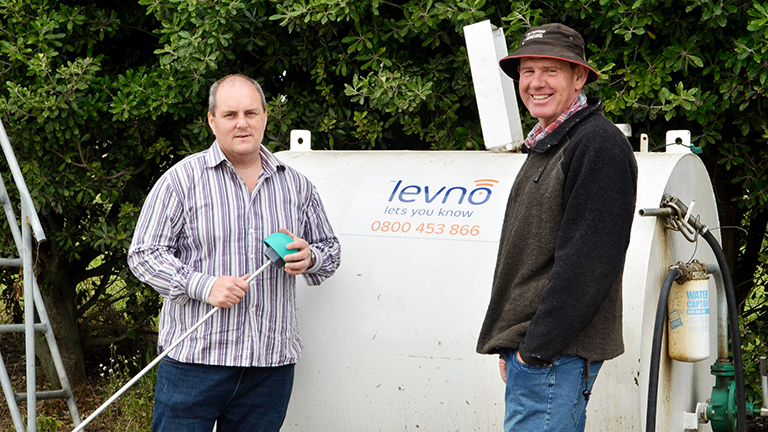 The “Internet of Things” (IoT) is a term that gets bandied about, but what exactly is it and what does it mean for the average Kiwi?

Spark is about to switch on a network across New Zealand that’ll bring IoT connectivity to you at your home or workplace. Sounds a bit abstract, right? Well, to help you imagine how it might change your life for the better we’re sharing stories of people and businesses who are already using IoT in the “real world,” with some outstanding results.

We headed to Rangitikei to find out how Levno are using IoT to let farmers keep an eye on valuable fuel supplies.

Levno’s fuel tank monitoring system consists of a battery-powered sensor attached to the fuel tank, which immediately reports any change in volume. This information gets sent in real-time, via the cloud, to the farmer’s phone. When levels are low, the fuel distributor gets told that a delivery is needed.

Farmer James Griffin is going to be one of the first customers to use Levno’s fuel tank monitoring service over Spark’s LoRaWAN™ network from April.

James manages the 200-hectare Griffin Family farm in Rangitikei. He has two diesel tanks and two petrol tanks which service three tractors, a truck and ten motorbikes. With some fuel tanks as far as 3.5KM from the farm house,  James has experienced how difficult it is to keep tabs on the valuable resource. As soon as Levno brought out their monitoring service, he got on board.

“The potential in the original system for milk monitoring and fuel, I could just see it working on our farm,” James recalls.

“The way we have it set up is that when there are any deliveries or removals from the tank, I have emails sent to me - particularly with removals. I have a text set up as well.”

He says the system allowed him to stop fuel theft—something common on large farms. It gave him visibility of when fuel was disappearing unaccounted for. If fuel was removed during the night, he could know straight away and investigate.

It has also saved him time: “I don’t have to proactively tell anyone that I need more fuel.

“We were constantly running out of fuel a few years ago. Now we can adapt to and monitor seasonal use better, and when we do need more, the system sends a message to Allied Petroleum and they come by with a delivery.”

If you’re interested in finding out more about a Spark IoT service, please visit www.sparkdigital.co.nz/solutions/iot/ or get in touch with us here and one of the IoT team will give you a call.