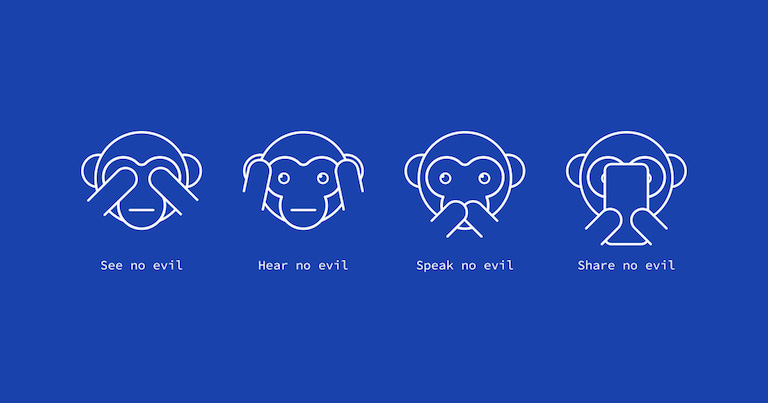 Spark is calling for New Zealanders and businesses to support a #ShareNoEvil movement that could help deprive terrorists the fame and oxygen their evil needs to survive; with the ambition of making the act of sharing terrorist content culturally unacceptable in Aotearoa.

As one small step towards achieving this ambition, the social post links to a downloadable Google Chrome extension titled #ShareNoEvil that lets users block the alleged Christchurch shooter’s name on a number of mainstream websites and replaces it with the words ‘Share no evil.’

Based on the Japanese pictorial maxim, ‘The Three Wise Monkeys’ (see no evil, speak no evil, hear no evil), #ShareNoEvil adds a fourth monkey as a symbol of solidarity following the tragedy in Christchurch on Friday 15 March.

Spark’s Brand Lead, Sarah Williams, says it has been heartening to see businesses and communities come together to stop the mass propagation of hurtful online material in the wake of the Christchurch terror events.

“Spark, along with other New Zealand internet service providers took unprecedented steps to slow down the spread of the mass murder footage taken by the gunman, including temporarily blocking access to websites containing the video. Spark, Vodafone and 2degrees also issued an open letter to major social media providers calling for an urgent discussion to prevent the uploading and sharing of harmful content.”

“While we took extreme measures for an extreme situation, we knew blocking websites was only a short-term solution. The bigger challenge we face is how can we help people think twice before rushing to share hateful content such as the alleged gunman’s video. That’s why as an industry, we are backing a campaign encouraging New Zealanders to ‘Share No Evil’ online,” explains Sarah.

In addition, Spark has begun contacting eligible broadband customers to remind them that Net Shield Basic is available with their broadband plan at no extra cost. Spark has added the footage and imagery from the Christchurch attack on the security tool, which specifically blocks abusive content such as graphic violence and hostility based on race, religion, gender or ethnicity, illegal activity and pornography.

The #ShareNoEvil digital tool and social movement is a call to action led by Spark, supported by New Zealand businesses and powered by anyone wanting to help stop the spread of terror-driven content. The first businesses to join Spark’s call to action are Vodafone and 2degrees.

The plugin can be downloaded at www.sharenoevil.co.nz.