Spark scoops up multiple awards in a week of winning 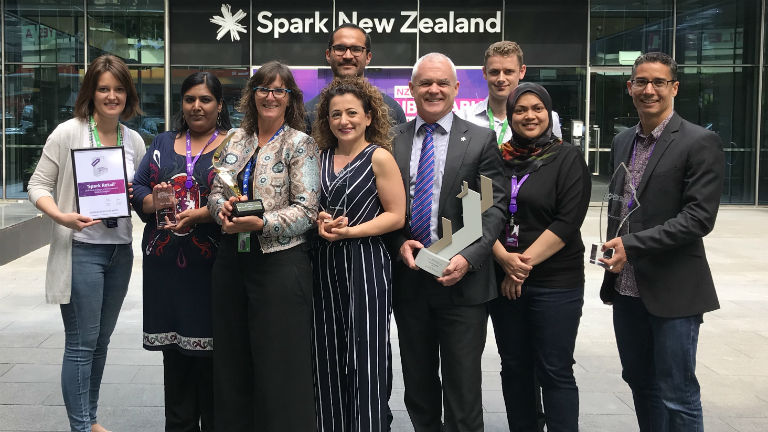 This week Spark has collected six trophies at five different awards events, demonstrating how the company’s reputation has evolved, as it has repositioned from a traditional telco into a customer focused digital service business.

Last night, there were three prestigious award events around Auckland where Spark gained recognition – the Deloitte Top 200 Awards, the Retail Employer of the Year Awards, and the New Zealand Law Awards. Earlier in the week, Spark came out on top at both the Information Security Awards and HP Partner awards.

Spark’s Managing Director Simon Moutter acknowledges the huge effort of thousands of people at Spark who are inspired to get up every morning and do awesome things with technology for all New Zealanders, especially the more than 2.5 million customers.

“All across Spark, and previously at Telecom, we’ve been doing great work for our customers for years – but for a long time, it has been hard to get recognition for this. Today, I really sense the mood has changed, as more and more people respond positively to the outstanding things we’re doing every day to help our customers unleash their potential.  It’s awesome to see this now being reflected in some impressive additions to our trophy cabinet and we are really proud of the work that we’ve delivered.”

At the Deloitte Awards, Simon Moutter won the very prestigious title of CEO of the Year, after being a finalist in the same category last year.  The judges said Simon deserved the award for his “relentless commitment to Spark’s future as a digital services business”, his focus on innovation and diversity, and his contribution to broader issues impacting New Zealand.  In the Young Executive of the Year category, Spark Venture’s Ed Hyde was also a finalist.

Across town at the Retail Employer of the Year awards, Spark’s retail stores won out as best employer with between 100 and 1000 people.  Voted by the public, the awards recognise those Retail businesses that embrace, promote and have outstanding employment practices and values in a wide range of areas.

And at yet another venue on the same night, Sasha Daniels from Spark Group Legal was named In-House Lawyer of the Year. Sasha is a competition lawyer who has been awarded several different legal awards both in New Zealand and overseas during 2017.  The Spark Legal team was also a finalist in the In-House Law team of the year.

In Wellington earlier in the week, at the iSANZ Awards (Information Security Association of New Zealand) Spark took out the best Security Awareness Campaign for work in building better internal awareness of Cyber Security risks. And at the HP Partner Awards Jono Hastings won Channel Sales Person of the Year and Spark won Personal Systems Partner of the Year for the second year in a row.