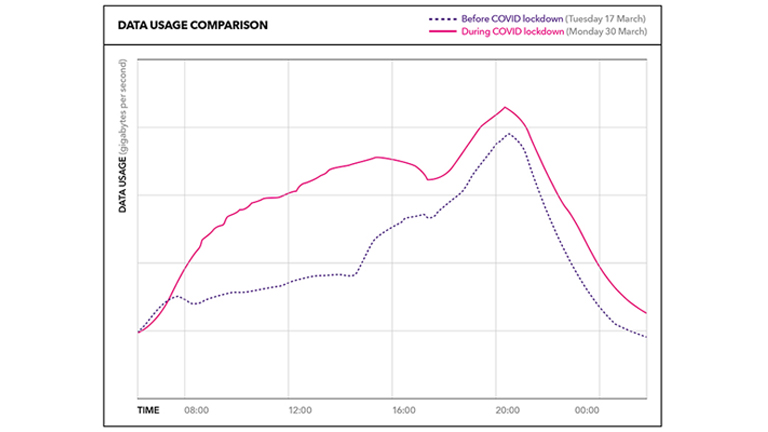 How Kiwis’ broadband usage has changed under the COVID-19 lockdown

As New Zealanders adapt to their ‘new normal’, Spark’s network has seen a shift to a ‘7-day weekend’ – where broadband usage volumes during the week now resemble usage volumes over the weekend pre-COVID-19, and weekend peak usage is elevated further again.

Weekday daytime broadband usage has roughly doubled since remote working became the norm, while data traffic at peak hit a high of 27 percent above normal. Mobile traffic (at peak) has also grown by 22 percent as many of Spark’s customers have used wireless broadband, which runs on the mobile network, to work, learn and connect.

“Normally on a weekday there is a small peak during breakfast that drops back down as everyone heads out for the day. Traffic starts to rise again gradually throughout the day then more quickly as kids return from school. Then there is a dip during dinner time, before usage rises again until the typical evening peak of 9.00pm,” Beder said.

“Since we moved into lock-down, usage on weekdays now has a more rounded profile like the weekends – rising fairly steadily throughout the day.

“Over the first weekend in lockdown, we saw a massive spike in broadband traffic over Friday and Saturday nights, with Friday night hitting a peak higher than during the Rugby World Cup. This was partly due to weekend usage increasing generally as a result of COVID-19, as well as the release of an update for the video game Call of Duty.”

Spark has seen congestion at times on a small number of cell sites, but this is to be expected given the increase in traffic.

“We have invested for many years in our network capacity and as a result our network has been very stable across fixed and wireless broadband and mobile voice, despite the significant increase in usage. We will expand capacity when it is needed with our Cellsites on Wheels (COWs), or by adding additional capacity onto individual cellsites, and our team will continue to tune the networks to create the best experience for customers over the coming weeks.”

Beder added that Spark’s support for customers, which included lifting caps on data capped broadband plans, has been well received.